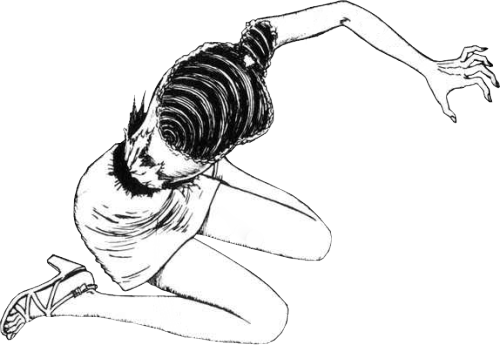 Hello! This contains in depth spoilers for Uzumaki. Please read it before reading this. Also, this was written for ENGL 1010 and personal enjoyment!
It's a-okay if you disagree with all or most of it. Just view it as a thought exercise :-)

Legendary mangaka Junji Ito’s most famous work, Uzumaki, is the story of a town ‘infested’ with spirals. It is a terrifying ordeal of a town’s inhabitants slowly growing obsessed with spirals- beginning with the protagonist, Kirie, finding her boyfriend’s staring at a spiral shaped shell in an alley way. Kirie remarks on this strange behavior to Shuichi, her boyfriend, and he proposes that they leave the town together. This introduces the reader to the fact that Shuichi seems to know much more about what’s going on than anyone else in the story. He explains his hatred of the town and how he will lose his sanity if he stays there. The town is contaminated with spirals. He doesn’t explain further. Throughout Uzumaki, Shuichi seems to be aware of what is happening in the town around him. Many of his behaviors resemble that of someone experiencing psychosis such as his paranoia, fear, and emotional instability and his knowledge of the events in town is never explained, and perhaps, Shuichi’s psychosis is coming to life through Uzumaki.

Shuichi is introduced in the first chapter of Uzumaki as Kirie’s boyfriend. He goes to high school a town over. Kirie explains the behavior of Shuichi’s father to him, and he proposes that they leave the town. Their conversation continues, and he gets more upset. He says the town is driving him crazy, and the sound of the town’s sirens are piercing his ears. According to the National Association of State Mental Health Program Directors, a common symptom of psychosis is a heightened sensitivity to noises and disorderly thoughts. Shuichi seems to believe the town is the cause of his troubles, and it is likely why he no longer attends high school in the same town as Kirie.

In the bonus chapter of Uzumaki, Shuichi discovers a spiral shaped galaxy while peering through his telescope. He runs away in fear and says that someone else can take credit for the discovery. Kirie goes to check on him, and he exclaims that he “can feel the radio waves.” (Uzumaki). This is an interesting choice of words because of the “denpa.” Denpa is a term that refers to individuals with bizarre beliefs, and these individuals may speak incomprehensibly. It is defined as electromagnetic wave. (Jisho). It is a fascinating choice of words, especially accompanied by Kirie telling Shuichi to get ahold of himself. 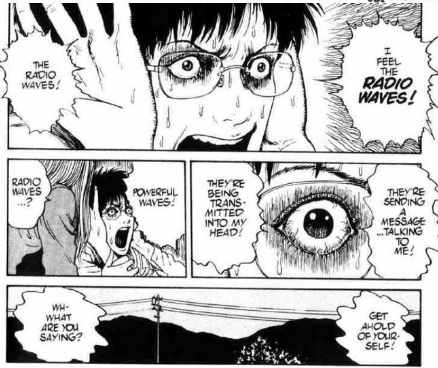 In chapter three, a beautiful girl named Azami Kurotami with a crescent shaped scar on her head moves into town. Everyone is enamored with her and considers her absolutely beautiful. She accompanies Kirie when she visits Shuichi, and he is terrified of her. He claims that she is a spiral, and he doesn’t want her to ever come near him again. Paranoia, a symptom of psychosis, results in the person believing someone is after them (Medical News Today). Azami visits Shuichi again that night, and he screams at her. He claims that she has a spiral on her forehead, and as he predicted, her scar has turned into a spiral shape much to her surprise. This is another one of Shuichi’s unexplained predictions that seem bizarre to the average person. 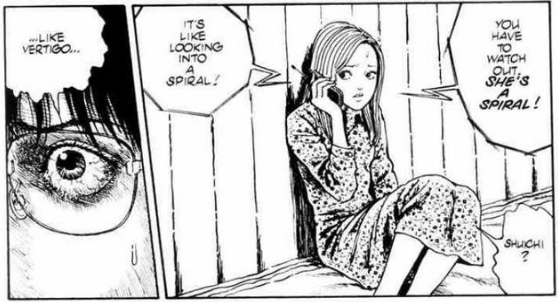 In chapter four, Kirie’s father grows an obsession with the spiral shaped plates coming from the Kiln, the oven used to harden clay objects (Britannica). He attempts to sell the art-like pottery, but not a single person buys it. He then uses the plates to serve food for his family. Shuichi is very disturbed by this. Shuichi’s father reveals that the clay used for the plates came from Dragonfly Pond. He runs away in terror. Later that night, Kirie hears voices from the kiln calling Shuichi’s name. Coincidentally, Shuichi calls her right as the voices are calling his name as if he knew something was going on. He hears the voices. He believes his parents are calling to him from the kiln. Hearing voices is the most common symptom of psychosis (NDirect). Despite Kirie also hearing the voices, they’re still focused on Shuichi’s experiences. Shuichi smashes the kiln, freeing him from the voices. 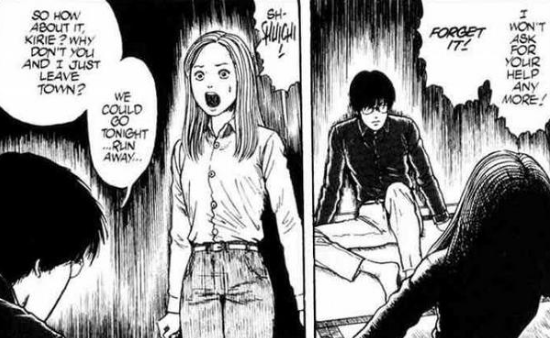 Shuichi’s delusion once again come to. The lovers twist into a spiral together, and Kirie now believes that Shuichi is always telling the truth even if it sounds bizarre. In chapter 7, Kirie complains to Shuichi that people at her school are obsessing over attention. Shuichi explains that this is because of the spiral. (Uzumaki) 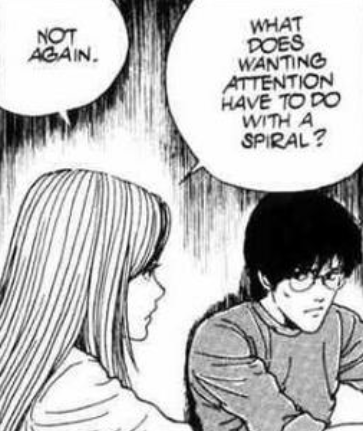 Kirie is distressed hearing this and worries about her friend, who is afflicted by the obsession with attention. Shuichi’s observations are correct though there is no basis for it. Kirie’s hair grows longer, into spiral shapes, frightening Shuichi but mesmerizing everyone else in town. At the end of the chapter, he cuts it off, saving her from the spiral curse. This delusion could possibly represent how Shuichi finds Kirie to be very beautiful, and his mind manifests this by turning her hair into the spirals he obsesses over. In chapter 12, Shuichi even refers to Kirie as hypnotic. (Uzumaki)

In chapter 12, Shuichi is very addled by what he believes to be an approaching typhoon. He runs through town screaming that a typhoon is coming, and no one believes him until it comes true later that day. The eye of the storm is spiral shaped, cursed by the spiral that Shuichi’s delusions brought into existence. Kirie tries to leave home to deliver lunch to Shuichi while the storm takes place. She stares into the spiral shaped eye of the storm, and it begins to whisper her name. Kirie believes she’s hearing things, and her mother pulls her back into the house before she can walk any further. She rests that night hearing her name being whispered in the wind. Kirie walks outside the next day to deliver lunch to Shuichi only to find that the eye of the storm is sitting over her house, staring at her. It seems to represent Shuichi’s love for Kirie, and Shuichi even declares that the storm has taken a fancy to her and that he now has a rival. 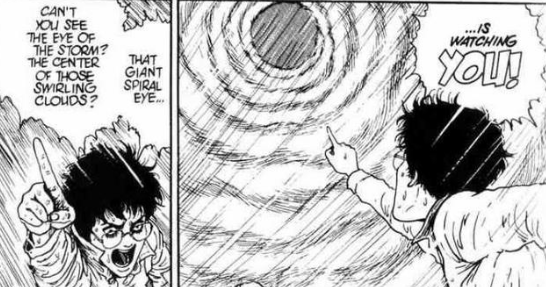 The final chapters of Uzumaki feature the town’s end. Twisters begin to appear, trapping people in the town. Shuichi states that the town is turning itself into a spiral, and it will be destroyed. Finally, Shuichi’s hatred and fear of the town begins to take form. The town is slowly destroyed. 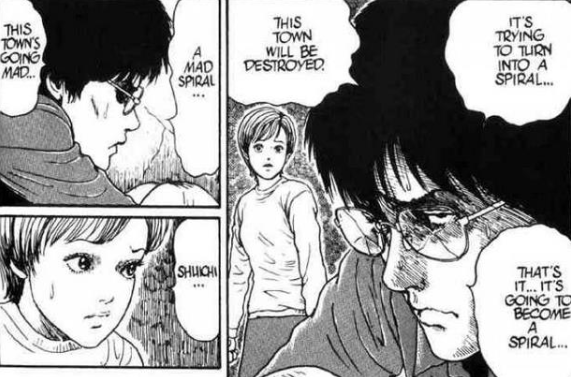 Shuichi’s ever-present fear of the town dominates his life though he shows throughout several instances that his love for Kirie is much stronger than his psychosis. When he saves her from her hair, when he tries to keep her safe from the eye of the storm, and this holds true in the end of Uzumaki. 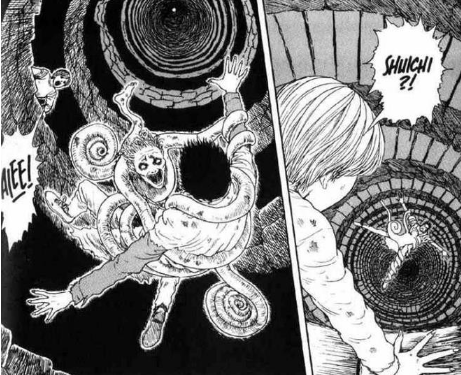 When walking to the center of town with Kirie to find her parents, Shuichi tries to protect Kirie from a spiral-infected inhabitant lying on a staircase. In the process, it wraps around him, and he falls. Kirie runs after him and finds him at the bottom of the chasm. He says he can feel the spiral “invading him at every moment” and that he can’t run away any longer. A touching scene that holds true throughout the manga. It’s satisfying to watch someone so mentally troubled love someone so much. He tells Kirie to escape, but she refuses to leave his side. They twist together, symbolizing them giving into the psychosis. There is no more resisting the call of the mind. There is no more fighting the illness. It has consumed everything in town, and now, it has finally consumed Shuichi, the one who caused it all. 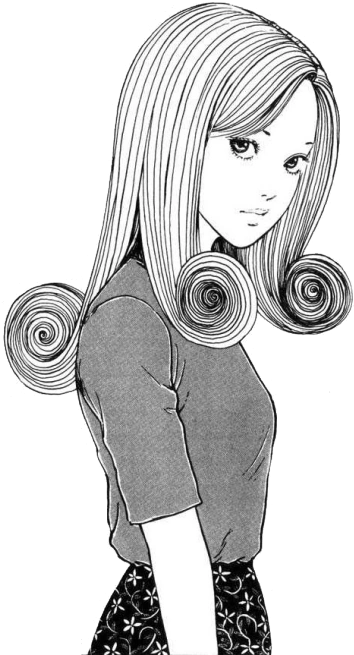