Good evening. (it's 12:45 AM) Today was probaby one of the worst days of the year because of some of the actions of my mother and getting over illness. I don't know though. There's probably been worse. I just can't remember.

I'm kind of going crazy lately. I haven't taken my medicine in a few weeks. I think my brother lost the bottles. A lot has happened because of my family being really dysfunctional. I don't really have the energy to talk about it. Hopefully, it will be forgotten.

I'm always jealous of others. I can feel it... It's making things unpleasant. I'm happy I left twitter. I can't be jealous of others there now, but now my jealousy transfers to other things.. Things that do not matter at all. I think the only way to escape it is by isolating myself, but I love my friends a lot.. I do not want to leave them.. And I like making new friends..

I've decided to talk to people less... I'm not messaging a lot of people I considered myself close to anymore because they rarely speak to me. So they must not like me. There's no reason to speak to people who don't like me. Maybe they have other things going on. A lot of people are getting sick lately, but.. It's okay. I'm sure if they miss me, they'll message me eventually. I'm not worried.

It's New Year's Eve... I think it is the time for resolutions, but it's hard to think of anything when I have so many unpleasant emotions in my heart.

The friends who actually talk to me.. Some of them can tell I am not okay. I played Splatoon with my friend Zed today, and it made me so happy. He asked me.. I didn't have to ask him. That means so much to me. 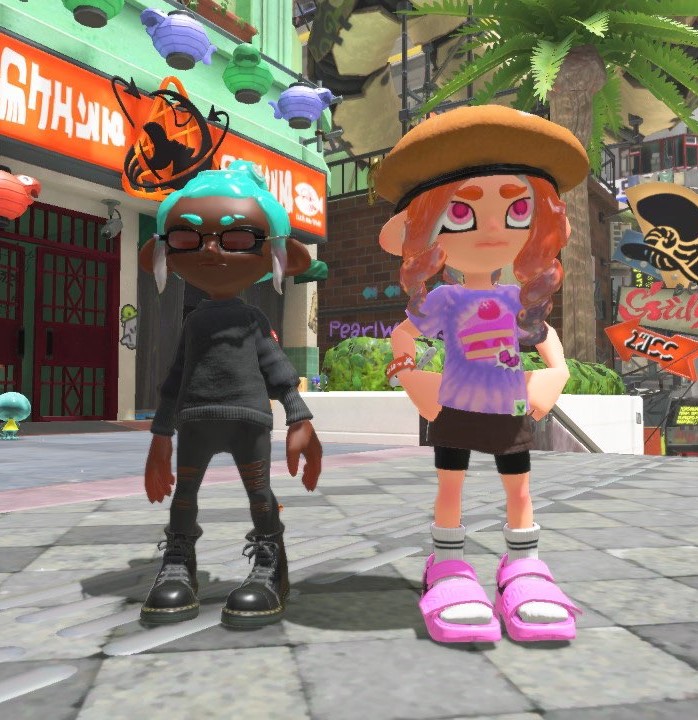 thank you zed!!! we're the coolest
Splatoon has been really fun for me.. Splatfest is this week. Zed and I are team sweet :-)! Exciting.

I feel a lot better thinking about our friendship... Things are okay because I have you!

I should also add.. Happy New Year's Eve. I'm sorry for such a depressing entry. The New Year is my favorite time.. New beginnings.. Reset. It's just fun seeing time pass. Making resolutions is one of my favorite activities, even if it's difficult for me to keep them.

The only resolution I have now is to stop investing so much in relationships where the other parties clearly don't think/care about me as much. It's something I've done my entire life. It's really painful. I have a lot of love in my heart.. And I have a lot of obsessive tendencies. I want to talk to people even when they don't speak to me... Luckily, during the past month, this behavior has almost entirely ceased.. :-)

Salutations! The blog goes online today. Now my mental illness is on my website. My FC2 is now password protected. There's some editing I want to do a bit more, but my head hurts really badly, and I've been doing this for over 4 hours straight haha. I just want it online.

I have decided to stop using twitter... The only thing I plan to use from now on for art is tumblr and neocities. There's a lot of reasons I left twitter though I'm sure you're probably thinking it's because of Elon Musk. Well, well, I've always wanted to stop using twitter. Him adding views to tweets finally pushed me over the edge. Unlike Instagram, I don't plan to delete my accounts.. My accounts will just remain inactive.

I got Warioware (and some other things) for Xmas. I just want to talk about Warioware because it's on my mind. I asked for it because I remembered it being fun.. It's.. Fine. I could've lived without it honestly. It's very bizarre. It seems like it appeals to children, but it's a bit too difficult for my sisters. I'm a bit sad because I really wanted to play it with my mom, but it's hard to get her to focus on spending time with me.. We played for a little bit. There's a girl at my college I'm thinking of asking to play with. or.. I'll just go on YikYak and ask if anyone wants to play in the student center haha.

I'm thinking about starting a YouTube channel... Just playing Hollow Knight. I have 75 hours in it on switch. I want to buy it on Steam and start over.. Sink another 75 hours into it.. Get lost in the world again.... but this time everyone can see how bad I am at it on camera! I won't do this, but I like to imagine. I've been watching Skurry. They're very good at Hollow Knight... I am not. I'm stuck on Nightmare King Grimm and the Radiance.. I'm 89% done.

Okay so. I really wanted this entry to be more interesting, but sitting up at my laptop is a bit painful. I've come down with something. So. Goodbye dear reader. I hope to provide a more substantial update in the coming days.

Hello. This is my first blog entree here. Goodbye FC2. I really like FC2 a lot, but my primary excuse for using it is that it was easy to update from my phone, but I started updating only once a month and realized it was about time to move to my website.

There's lots of subjects I am thinking about. Today I decided I'd only post my art on twitter and tumblr (and privately archive things on toyhouse). I don't really want to be super online. Tumblr is really the only social media I enjoy. Twitter just allows me to keep up with people, but lately the desire to delete it grows stronger... I just.. would fall out of contact friends who don't talk to me often though often I wonder if it's worth trying to keep friendships with those who do not message me often. Perhaps they do not like me...?

In my last entry (on FC2), I said I was dropping the ball academically. This was an overexaggeration. I got all As and one B my first semester of college. I know things will get much harder from here on out, but this makes me happy. School has always been difficult for me due to the state of my mental health. The B could've been an A if I hadn't burned out so hard at the end. Maybe next time.. But this gives me hope.. I am not destined to dropout and end up as an hikki again.

Now I am destined to not have friends and live alone, but that's okay haha.

This is going to be all over the place since I haven't updated in the month.

First, school.. I am dropping the ball. I am so tired. School is exhausting and I keep not finishing my pre-cal homework. My final is tomorrow. I'm so scared. I've been really sick and tired and this is my last day to study. I just need to talk about it here. I am reaping what I have failed to sow haha. I'm not going to fail the class. In fact, I'd have a 90 if I did the homework for half credit, but unfortunately, I am out of time. A B is satisfactory though. I could even get a C and be happy I think. I didn't fail even though my abusers didn't believe in me.

I haven't been eating much lately... Just one meal a day. I can't stand the dining hall food anymore.

I watched Hamilton when I was home during fall break. I'd been excited to watch it for months with my mom.. She didn't really pay attention though... So I guess I shouldn't have waited. I thought it was brilliant. My least favorite thing was the depiction of Mrs. Reynolds considering that her story is rather sad in actual history, but I realize the musical was about Alexander Hamilton, not her. And in his eyes, she was a seductress.. It still feels gross though.

The music is stuck in my head. I feel like it is corrupting me. I'm happy I consumed it after the fandom craze though. I really dislike fandom culture. Sometimes i see their old comments on YouTube videos and I squint at them... Did we watch the same musical?

I feel like that with a lot of media. I remember it with Midsommar, American Psycho,Goodnight Punpun, even Serial Experiments Lain. I can't tell if people genuinely missed the point of these pieces of media or if they are just making really bad jokes. Maybe, I don't have a sense of humor. Sometimes everyone around me is laughing, and I just sit there.

I'm still in love with someone. It's pretty fun. I like liking someone so much. Hopefully it goes away.

And I have another person who makes me happy. A friend. We talk everyday, and he cheers me on! And he doesn't expect anything of me. He doesn't disappear for weeks at a time then shower me with gifts. The other day he gave me money for Wendy's despite knowing I spent $50 on anime figures. Hahaha :-)

And you might be wondering... Why did you spend $50 on anime figures? You're a broke college student..

It was eleven figures by the artist Range Murata. These are my favorite figures on Earth and the price was a steal!!! And also my friends encouraged me to buy them haha. I'm really happy. These are all of my figures together. I'm going to mail the extra to my friend.

Oh also, the RPG Maker Zine had 100 applications. We've sorted through all of them and accepted everyone we'll accept :-) ! Now we just need to send the emails. I need to talk to Zed about how we will go about this... I'm thinking about just BCCing everyone who was accepted and everyone who was rejected.

Biggest thing. I go by Mala now! Though Isaac is still acceptable. I wanted something more feminine to go by. We'll see if I change it later. Internet aliases are silly.

Now I study. Wish me luck.